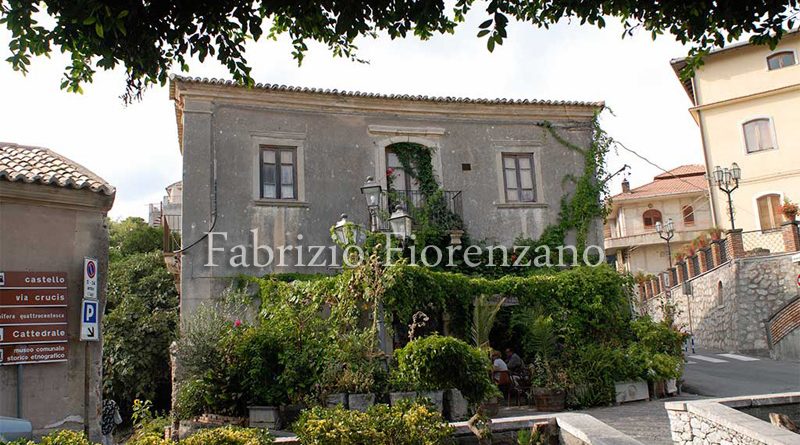 “Never tell anyone outside the family what you’re thinking!” or “A man that doesn’t spend time with his family can never be a real man.” These sentences, spoken by the hoarse voice of Vito Corleone (Marlon Brando), even after all these years are still stuck in my mind since having seen one of the greatest masterpieces in cinema history: The Godfather (1971), an adaptation of the classic novel by Mario Puzo.

Expressions that imply and summarize a time-honoured Mafia philosophy, belonging to an old-fashioned Sicily.

The term “family” was used to identify the so-called primary cell, that is to say a hierarchic structure on a territorial basis which controlled its own illegal business in a city area or on an entire town. But Mafia binds towards the real family were just as strong, and it was important for a man to fully play his own role of householder to protect his wife and children.

Some important scenes of that movie, which have become part of cinema history, were indeed skillfully set in Sicily.

Among the sites elected by Francis Ford Coppola for his work, there are some that remind us of the old and evocative landscapes that were the background of mafia wars and its ancestral grip on the region: Forza d’Agrò, Savoca, Fiumefreddo, but also Taormina and others.

Aside from Taormina, whose fame is not new to us, we are talking about evocative sites of ancient spirit that very few know. Forza D’Agrò and Savoca are indeed two beautiful artistic towns with several interesting things worth seeing and welcoming restaurants where you can taste good local Sicilian food.

Originally Paramount wanted to shoot the movie in Corleone, but that turned out to be impossible because apparently the real mafia asked the company for a huge kickback. It was Saro Urzì, the great actor from Catania who played the owner of Bar Vitelli in the movie, who told Francis Ford Coppola he knew a place very similar to Corleone that would have been perfect. That place was Savoca.

Savoca stands on a hill of 300 meters and was founded in 1139 by Ruggero II. Nature has endowed it with a stunning landscape from where you can admire part of the Ionic coast, up to Calabria. The village is now almost deserted, the population having diminished in the last few years due to growing youth emigration.

Forza d’Agrò, not far from Savoca, is one of the most beautiful sites I ever seen in Sicily. Situated 400 meters above sea level, its population doesn’t exceed a few hundred people.

Thanks to its geographic position, it was often used as a safe port by pirates and smugglers.

The old hamlet of Quartarello offers a surreal sight with its small shabby houses leant one against the other, among which very steep stone stairs and tiny alleys are inserted in a labyrinthine way.

Among the amenities there is the Norman castle, on top of which in 1876 a cemetery was established. The peculiarity of the graves is their unevenness.

Some of them are even open, and in one the bony remains of a little girl, who died at the end of the nineteenth century, are still visible.

Scenes from “The Godfather”

In Savoca the building that towers above all the others is San Nicolò’s Church, also known as Santa Lucia’s. This cultic site is what made the village known in the first place, being the background for some famous shots in The Godfather.

Michael Corleone, (Al Pacino), after having killed the mafia boss who had tried to kill his father, finds shelter in Sicily; here, while having a walk with two escorts, he meets a beautiful local girl (Apollonia), falls in love at first sight and decides to get married. The three men stop at Vitelli’s, a bar in the centre of Savoca, still open today, finding out that the owner is Apollonia’s father.

The film implies that the village is Corleone, but actually Pacino is walking through Savoca’s narrow streets.

The real owner of Bar Vitelli is Mrs. Maria d’Arrigo, an old woman who remembers with affection the year 1971, when the small village was invaded by Paramount vehicles. She says that Pacino loved her sorbets and spent a lot of time at the counter. When the three Mafiosi get to her bar in the movie, she was inside the venue. Before 1971 the bar had no name, but the film company wanted it to be called “Vitelli’s.” Since then, the name hasn’t changed. Maria says that sometimes she still receives Coppola’s greetings from America. Two years ago she received a gift from Al Pacino: a beautiful pen with a red and black heart pattern on it, a token of the actor’s affection for Maria.

The inside of the bar is like a little museum: a display of old mementos and memorabilia from the movie. Maria is very jealous and fond of her little but precious treasure. In the middle of the entrance hall are still in relief the chairs where Pacino and the two bodyguards sat down in the movie; the walls are covered with pictures and articles about the film, that she shows me proudly. Opposite the bar there is a little square, now with trees and a modern surface. At the time of the film, it was empty and they shot the reception scene for Michael and Apollonia’s wedding.

Still in Savoca other scenes were shot, for example the wedding scene. The couple gets out of San Nicolò’s Church and walks along the street that leads to Vitelli’s. Ahead of the newly-weds are the town band and the two bodyguards with “lupara” (sawn-off shotgun). In the 70s that part of the way was dusty and today, after 40 years, it hasn’t changed much, a part from the majolica surface. In some streets of the village pictures from the film are displayed and local people who took part in it are singled out.

Every day, thanks mainly to the Vitelli’s, six or seven buses of tourists get to Savoca to visit this typical Sicilian town.

IN ORDER TO BUY THE REST OF THE ARTICLE, CONTACT ME. [email protected]