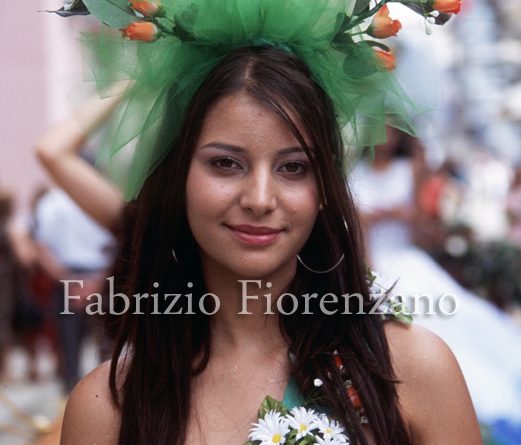 Immerse Yourself in Sicily’s History

Story and Photos by Fabrizio Fiorenzano

In the wonderful and hot land of Sicily, between the cities of Catania and Enna, discover Raddusa, the ideal place to breath the pure air of rural life. Arriving by car you cross a desert valley where the landscape resembles the planet Mars and are welcomed by a banner that reads: “Raddusa, the city of the wheat.” The town’s name comes from the Arab word “Rabdusa,” land of abundant vegetation.

For three days every year, at the beginning of September, (this year from September 10 through 12), a city is in fiesta. The atmosphere becomes that of rural life in the Sicilian hinterland in the fifties when the culture of Raddusa was still firmly tied to the earth and to its products. The most important product was wheat.

Woven bundles of wheat adorn the main church of the country, “The Mother Church,” the shops, the cafes, the gardens, the balconies of the houses, and every street. Bundles are always freely distributed to inhabitants and visitors.

The three days are filled interesting activities for visitors, who are constantly tempted to enjoy delicious pancakes. People love to be photographed smiling and dancing and are very proud to show off their traditions.

Around 10 a.m on the final day, a long parade forms in Regina Margherita street.

At the head of it, the farmers and children are dressed in traditional clothes and push traditional Sicilian wheelbarrows, the last of which is loaded with bundles of wheat that are distributed to the people. Four beautiful and charming girls dressed to represent the four seasons of the year are adorned with flowers and carry bundles in their arms. Other girls wear suits that represent different divinities, but the central focus of the parade is a carriage with a man and a woman dressed with old and elegant clothes who represent the Marquis of Raddusa Francesco Maria Paterno and his wife in 1810, Raddusa received from the king of Sicily, Ferdinando III, the permission to found Raddusa. Their carriage is followed by the main authorities of Raddusa, the first of whom is the mayor. The procession ends with the riotous folk group music band, The Ear (in Italina “la spiga”).

After the parade, everybody is invited to the main square take part in the dancing exhibitions, music, and games. A colt and other pets are given as prizes. At lunch, the first tasting occurs in “Milite Ignoto” square. Inhabitants and visitors line up or free bread seasoned with oil, oregano, and red pepper. The “pisatura do granu,” is a reconstruction of the ancient process of reaping in which sheaves of wheat, are stamped and pressed by the horses’ hoohooves accompanied by the sounds of propitiatory songs.

IN ORDER TO BUY THE REST OF THE ARTICLE AND HIGH RESOLUTION PICTURES, CONTACT ME. [email protected]