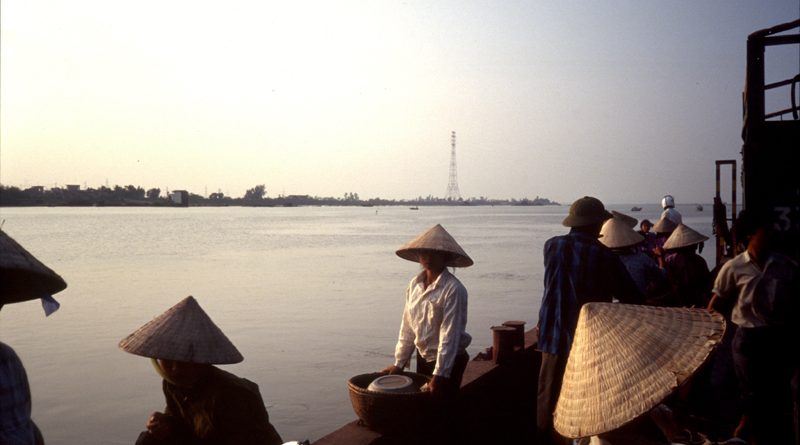 Of all the trips I took, the one to Vietnam will be the hardest to forget. It was a 20-day difficult, nerve-wracking experience.

“Welcome to Viet Nam Mr. Fabrizio Fiorenzano”. These were the words that welcomed me as I exited the arrival gate at the Saigon International Airport, printed on a sign held up by a Vietnamese government representative who had been tasked with picking me up by the Vietnamese embassy in Rome. It had been a very long flight to get there, but even as tired as I was, I felt very excited.

For political reasons, visiting tourists are restricted to specific hotels upon arrival. The embassy in Rome had given me a choice from three different hotels for my first three nights in Saigon – now officially known as Ho Chi Minh city – and I had chosen the Bong Sen.

Here I met two Bulgarian aircraft pilots employed by Singapore Airlines who were staying at my same hotel, Emil Kostov and Stephan Tontchev. They were surprised to learn that I was there all by myself, with no friends traveling with me and that I had no detailed travel plan. I was simply planning to go visit three locations, Saigon, Danang and Hanoi. Vietnam was not my first trip outside of Europe. I had already been in Thailand and Israel, twice each, so I was not unacquainted with non-Western cultures, but the actual culture shock in Vietnam was going to be a whole different experience. Both Stephan and Emil as well as other people recommended that I simply turned back and headed back to Europe as quickly as possible, given how risky my endeavor really was. But I remained undeterred, as I could not really understand what the big deal really was. Emil mentioned the case of a missing woman, an employee at the Danish embassy in Saigon, who simply disappeared while in transit to Hanoi two months earlier.

Although I was determined to continue my trip, I did however start experiencing a general sense of unease, something that would have been lingering on for my entire time in the country. On the fourth day of my stay I left for Danang, flying on a small plane. I got a room in a large and deserted hotel on China Beach, the site where the first American beachhead was established in 1965. The place was eerie, reminding me of the Overlook hotel in Stephen King’s “Shining”. I appeared to be the sole guest, and the only other people there were a custodian and a couple of maids.

I decided to go out on my own to visit the famous marble mountains and shoot some video, and was immediately approached by a group of five women, aged 13 to 70.  They started following me around as I explored the site, with a strange expression on their faces. I had no idea how to get rid of them, but I realized that they were waiting for a chance to steal my things. When they suggested to go visit some cave where some remains of American bombs could be found, I was certain of their intentions.  I turned on my video camera and, climbing the mountain with them, I answered their confused questions, while looking for a way out of this very uncomfortable situation. We crossed paths with a small group of Japanese tourists, and one of them came up to me to whisper “Be careful guy, they are trying to rob you or maybe kill you, go away from here as soon as possible!”.
Fifteen minutes later I finally found the way out of the area, and could eventually leave this group of women behind, in spite of their continued attempts to lead me elsewhere. But as I was on my way back to the hotel, walking through some pine woods I had another very unpleasant encounter with two strangers, who followed me wielding a long stick and yelling at me, demanding that I stopped. I ignored them and started running back to the hotel, still chased by these guys. After safely making it back to the hotel, I realized that my Bulgarian friends were not exaggerating describing how risky my idea or traveling around by myself really was.

And it did not end then, either. Over the next two days, I could spot those same two guys standing outside the hotel, waiting. I ended up staying locked up inside, with nothing to eat but light snacks and fruit – there was no restaurant in this hotel – waiting for my flight out to Hanoi two days later.

I eventually walked out to the beach right outside the hotel for a swim, still in a very fearful and tense state. Nobody else was to be seen on the beach, and although the place was beautiful, the fact that the waters were infested with jellyfish sure did not help me relax one bit.

After going back to the hotel, I was set on staying inside and wait things out, feeling too scared to go out again. The fact that nobody back home knew exactly where I was, and that I had no mobile phone or friends with me, nobody to talk to about my experience was making me increasingly stressed and nervous. I eventually got the hotel reception to let me place a call to the Italian embassy in Hanoi, so I could report my location and my safety concerns, and that if I did not show up there in two days to come look for me in Danang. But I did make it back safely to Hanoi, and could immediately go to report at the embassy as planned.

These episodes – and many other similar ones – did take a serious toll on me and my mental state, to the point that I found myself harboring a great sense of unjustified hostility towards complete strangers around me. I found myself staring at this boy who was quietly sitting alone in the Hanoi airport, and who ran away after noticing what must have been sheer hatred in my expression. The boy wasn’t bothering anyone, and to this day I don’t know what came upon me. I never felt that way before or since.

As I eventually left Ho Chi Minh city with my KLM flight, I was in a very tired and confused state. Two days after returning to Italy I experienced an actual nervous breakdown. At the ER I was given some strong medication and was told not to go anywhere for a few days.

Now, years and years later, I still don’t like to talk about my experience in Vietnam. I wish I could find again my friends Emil and Stephan, though. I don’t know what Vietnam looks like now, and I really don’t want to know. But I certainly know that since 1994 (after the end of the trade embargo), things there have been gradually changing for the better and that it is now an increasingly popular touristic destination.

It’s very important to mention that at the time I went to Vietnam in 1993, the country was still suffering due to the very long and stifling trade embargo imposed by the United States during wartime, eventually lifted by president Clinton in 1994 (30 years later). Vietnamese people were far less friendly than I expected. A people transformed and wounded by years and years of wars with the United States and France before that. Decades of hunger, torture, bombings and many other atrocities transformed this gentle civilization in a wary and suspicious people diffident of foreigners, especially of those of Western origin. There were no tourists there at that time, foreign nationals were there only to work or for very brief missions of some kind. What I just described was only a part of a short yet very intense experience in a country that I now suppose has significantly changed since 1993.

My advice is: do not be afraid to go visit unexplored places, even if this may imply some risk. If you do it with the intention of taking “speaking” pictures of your surroundings around you and to talk to local people every day, your trip will be absolutely unforgettable.